I recently visited West Park, in Mottingham and was very impressed with Tom, one of the people we support there.

Please note, Tom has given me permission to share his story and photos.

At the beginning of January, I visited West Park in Mottingham, where I met Tom, one of the people we support there. Tom has an incredibly busy schedule as he fills his time with pursuing his passions, which are cocktail making and power lifting. The Royal Naval College where Tom works twice a week

Tom started off his journey working at the Royal Naval College, where he still works twice a week. He mainly works behind the bar, serving drinks and cocktails, but also helps out in the kitchen and serving at events from time to time. Getting paid employment really gave Tom a sense of purpose and routine, which also in turn really helped to boost his confidence and morale. After discovering that he absolutely loved mixing drinks, he then turned his hand to finding other cocktail-related work. 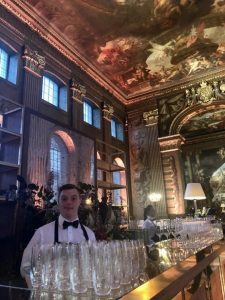 Tom at the Naval College He now works once a week at the London Cocktail Club in Oxford Circus. There, he learnt to make over 30 different cocktails, each one with a cool twist and he absolutely loves spending time there. Staff support his trip up to London on busy public transport, which again has been a real source of confidence and achievement for Tom. At work, he has also met a lot of new people and made many new friends.

In his spare time, Tom goes to the gym with his mum or dad about 3 or 4 times per week. It is his favourite thing to do as he gets to spend time with his parents, as well as improving his stamina and strength. He also has a Personal Trainer, who has helped him to massively increase his strength in weight lifting. Tom discovered his love for power lifting, which consists of three attempts of lifting the maximum weight you can with a squat, bench press and dead lift. Tom loved the sense of achievement it brings him, and so far has competed in many competitions. He is about to go to another competition and has upped his maximum weight!

It was a real joy to see the enthusiasm Tom showed about his various hobbies and really great to find out how well he had settled into employment. Well done Tom, and well done to the staff at West Park who have supported him throughout.